Was It John Knox In The Chapel With The Candlestick?

“It was a dark and stormy night”

Edinburgh, Scotland is one of our favorite cities. It is mystical, dark and charming. Known for its sordid and brutal history.

One would think they are safe during the day. Vampires sleep at night; therefore ghosts and spirits do too. Right? This is how we convince ourselves we as humans are the only day-walkers.

You don’t think that anything will make your heart race or the hair on the back of your neck stand up because that is reserved for the night when the “dead” come out to play.

Oh, but Edinburgh played its tricks on us.

Let’s pause for a moment and take in the view from Prince’s Street. Look up at the skyline of Edinburgh. See the architectural differences between Old Town and New Town. Notice how the once white stone structures have turned black over the years of exposure to smoke, dirt, and grime.

Smell the smoke from the coal and peat burning and lingering over the city, Auld Reekie.

Hear the stories the buildings are whispering. All their beautiful tales of horror, murder and mysticism. #sleepwithoneeyeopen

Witch hunts, murders, tenements stacked one upon each other, decay, superstitions all lay clustered in this mysterious city. At one time, the stone wall surrounding the city was meant to keep the residents in. Some still linger to this day.

As you meander through the narrow and dark closes from Prince’s Street to the Royal Mile, you feel like your steps are taking you back in time. A time in Edinburgh’s history filled with gory stories and history. It’s like an invisible string that ties us and pulls us in.

Scotland is known for its scary stories. Read them here!

We all have a fascination with the macabre and like to be scared...some more than others.

Natalie loves a good ghost story and watching a horror movie, alone, in the dark. She gets a thrill from sitting on the edge of her seat with her face half covered. Do you remember the movie Poltergeist? Natalie remembers watching this movie when she was six years old. “Therrrreee Herrreee.” She will tell you this is one of her favorite movies.

Connie, on the other hand, loves a good ghost story but will not be watching any horror movies alone. Her vivid imagination will have her convinced her neighbors are murderers. #TheBurbs

We both agree the paranormal is interesting and a curiosity; however, it is to be kept at arm’s length. We have an agreement, there will be no encounters or touching by a spectre.

When it comes to haunted ghost tours or staying in a haunted hotel, Natalie is an easy sell and Connie is not. Natalie is always trying to convince Connie to go on these “fantastic adventures.” Connie is known to drag her heels and then concede.

So, on this day, what could possibly happen on a bright and sunny Scottish day?

As our invisible string pulls us in, we climb higher and higher, thighs burning, to get to the Royal Mile.

We head to our first museum and where this story takes place.

The John Knox home is one of the oldest homes in Edinburgh and was built around 1490.

A little backstory on this home:

This home first belonged to Walter Reidpath and was passed down through the family to be inherited by his great granddaughter, Mariota Arres in 1556. Mariota was married to James Mossman, a goldsmith who was loyal to Mary, Queen of Scots. In 1573, the Castle was surrendered and Mossman was charged with counterfeiting. His punishment was to be hanged, quartered and beheaded.

It was during the siege of the Castle, John Knox is said to have resided in the home for a few months. It is believed he died in the residence.

John Knox, a Protestant reformer believed he was on a divine mission to reform the church in Scotland. He had many encounters with Mary, Queen of Scots and denounced Catholicism. He was known for his successful replacement of Roman Catholicism in Scotland with Presbyterianism. He was known to teach on the duty of opposing unjust governments in order to bring moral and spiritual change. https://en.wikipedia.org/wiki/John_Knox

Was he the cold and unapproachable man that most believed him to be? Or was he a man of deep principle and driven by his beliefs? If walls could talk!

Have you walked into an old house and felt something “off”? Surprisingly, the John Knox house didn’t feel weird. Our fight or flight impulse was not triggered. As we made our way around the old home, touching the stone walls, reading about the home’s history, we could visualize the storefront. We could see and smell the food being sold out the home’s windows.

We head up to the next floor. We look around and in the far corner is a window with a desk. 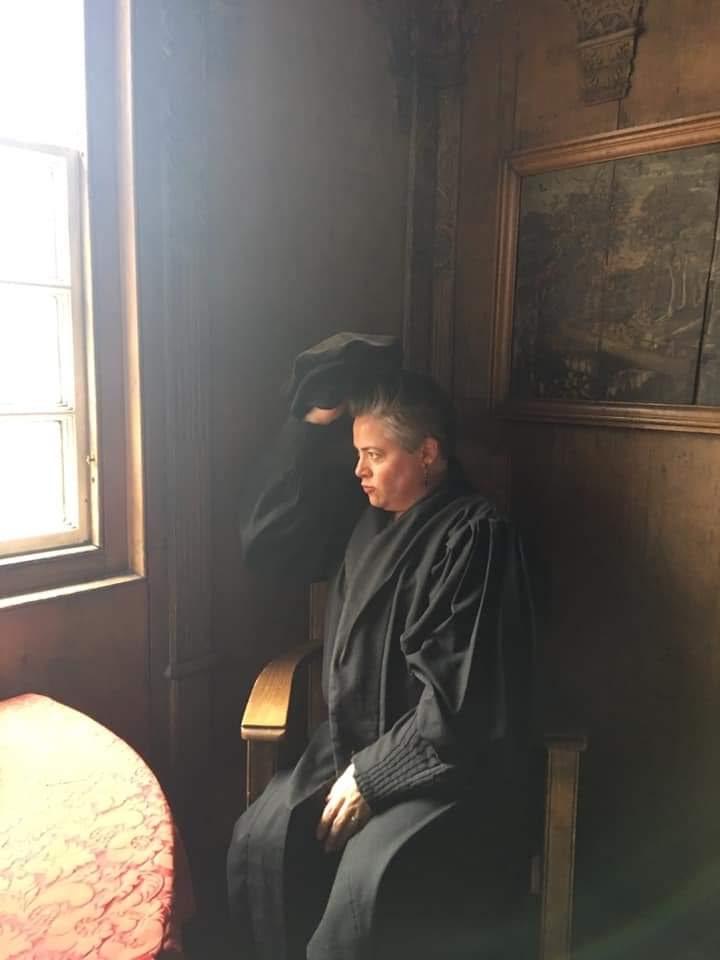 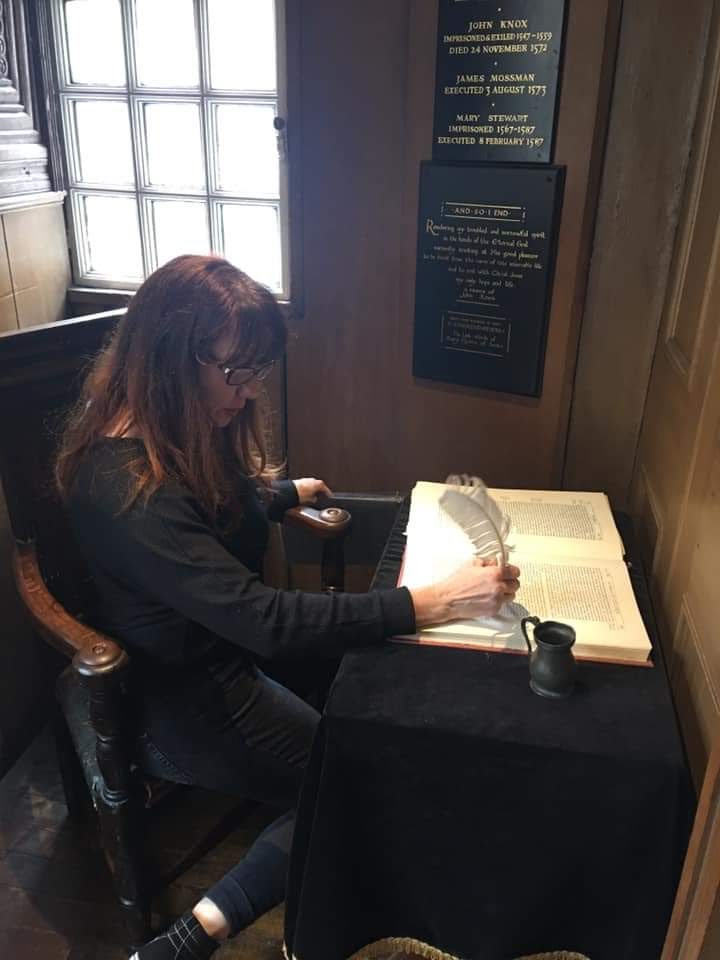 We joke around a bit and Natalie heads in to another room where there was a bench to sit and fix her shoes.

What happens next is hard to explain. #conjurestephenking

I hear Connie walking towards me from the other room and she’s making the strangest sound. It reminded me of a high-pitch muffled sound, like Charlie Brown’s teacher talking. “Mwah wah wah”.

I look up at her and her mouth had a fuzzy haze to it. I couldn’t see her lips moving but just the weird noise coming from her direction. I am trying to figure out what she is doing. That was odd but it wasn’t freaking me out.

“You made that garbled sound.”

“What are you talking about? I asked you a question.”

I told her that there wasn’t anything coming out of her mouth other than garble-dee-gook. I never heard a question. Plus, when I looked at her mouth, it didn’t even look like a mouth. It reminded me of one of my horror movies where the person’s mouth became stuck, like a gelatinous glob that tried to speak but couldn’t.

Something was there with us. John Knox? One of his enemies? #run

I felt a little lightheaded and I was afraid of standing knowing I might fall over. It was the weirdest sensation.

I sat there in silence, I know, for a minute or two running the scenario back and forth. I swear, there were not intelligible words coming out of her mouth. It was just sounds. #freaky

It was time to leave. Fight or flight kicked in. #walkdontrun

We get outside and breathe, i.e. “gulp” in the fresh air.

I keep explaining my experience that she wasn’t talking. That wasn’t her mouth. Weird. I know what I saw. I know what I heard. I had a hard time shaking that one off.

In the future, will we go back inside the John Know house? Of course… more selfies!

Are interested in experiencing mystical Edinburgh? Come see for yourself!

Have you had any encounters in Edinburgh? What are your stories?

*This site contains affiliate links to products. We may receive a commission for purchases made through these links.